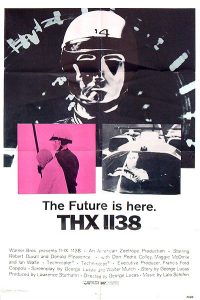 This movie has been seen by most film buffs many, many years ago on late night TV. If you are like me, it was an interesting film purely as a reference point for a young George Lucas. If you remembered it at all, it was for the use of white space and the long periods during which almost nothing discernible happens.

Well, it is almost 35 years later (35 YEARS!) and for reasons best known to film and DVD marketers, George Lucas has pulled it out of the vaults. Instead of just transferring the original print to new film stock, Lucas has re-cut several critical scenes; added a tasteful bit of CGI; zipped up the sound track and film score; and, best of all, turned it into the best reason yet for digital projection. Whether this is the original version he had in his head as a 26-year-old or one that he has fleshed out over the years is sort of beside the point. What is on the screen now is definitely worth your $10.

Yes, it is still a bit tedious at times (in a ‘2001: A Space Odyssey’ kind of way) and, yes, the plot holes and infamous continuity issues are still there.

But, Wow! The plot is a weird stew in which an allegorical Adam and Eve story is crossed with ‘Brave New World.’ (The Catholic act of confession will never be the same after you see it re-imagined here.) The crystal clear cinematography is a revelation. The characters’ multiple layers are wonderful. Donald Pleasence’s performance as the would-be leader/rebel is downright creepy. The way the camera lingers on a scene rather than quick cutting for effect is a welcome relief. This is adult subject matter and it is not what you expect out of Lucas. You have to ask why he didn’t pursue themes like this in later films. (Who knows, maybe the upcoming Darth Vader fest will return us to the dark side.)

Be forewarned, this is not a casual film that you can sit back and munch popcorn while it plays out in front of you. This is definitely art-house fare by a young director finding his chops.

Many of the message boards and most of the reviews of this film point out how many elements carry over to later Lucas films. (C3PO, the climactic chase scene, drones in service to masters, etc.) For me, the touchstone is not for Lucas, but for the Executive Producer, Francis Ford Coppola. Many of the themes explored in THX show up in Coppola’s ‘The Conversation’ three years later. Gene Hackman’s Harry Caul character is a clone of Robert Duvall’s loner forced to confront a faceless progenitor. See if you don’t agree.

Though they are releasing the film to theaters ahead of the DVD release, the place to see it is in a theater with digital projection. Similar to ‘Lawrence of Arabia,’ much of the action takes place in the far corners of the scene and I can’t imagine seeing this on anything less than a very large HDTV screen.