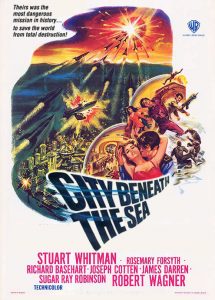 Why that dramatic remark! Simply because “City Beneath the Sea” was the only scifi movie/series pilot like it ever really developed for television. Everyone else was exploring the final frontier of space. The space age was booming, Skylab and the Shuttle right around the corner, why think about the future one could build underwater? Who would go for that? Irwin Allen did, and unfortunately no one really gave a damn because with the effort (pre-conception reel, all star cast etc.) lavsihed on “City Beneath the Sea”, it deserved more attention than it got. I won’t waste time giving a synopsis, others have done so very well with that, and yes I do realize how dated this movie is but I would love to have seen the continual adventures of the 21st century underwater city denizens, how their culture developed, their issues, and the intrigue. The 80’s and 90’s gave us horrid movies like “Deep Star Six”, “Leviathan” and the schitzophrenic but likeable “Seaquest DSV” for underwater thrills when all we really needed was a fertile and stable base to work with, like Pacifica “the” City Beneath the Sea.