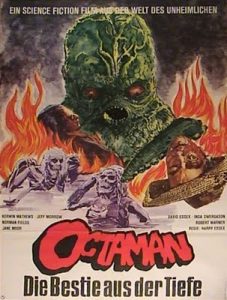 ‘Octaman’ is a pretty nice monster movie from early 70’s and includes one of the sweetest rubber costumes in the whole movie history. Created by Sixth time Oscar award winner special effects guru Rick Baker (‘Gorillas in the Mist)creature is a half man half octopus mutant, who terrorizes people in a small Mexican village. A group of scientists tries to catch the creature but Octaman seems to be much smarter than he looks. Some people will die and some will survive to stand up in the final battle against the powerful freak of nature. To be honest with you – this movie isn’t good. Actually it’s hilariously bad, laughable flick with bad acting and totally lack of gore. The music is boring as hell and cinematography for sure isn’t the first rate,but in overall ‘Octaman’ is a cult classic of bad movies and as I said it has one of the greatest costumes in movie history to date. Strong tentacles and scary red eyes -that’s the Octaman device. Absolutely must see for monster movies fans! It definitively needs a proper DVD release in a good quality and with some extras.