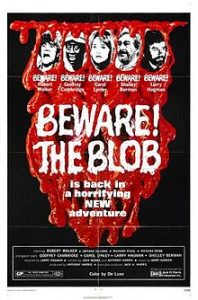 There are so many things to like about Larry Hagman’s “Beware! The Blob!” it will difficult to put it into a biblical context, but I will try. Overall, the movie seems to be retelling the story of the Old Testament with various allusions to the Qur’an and that Tao of Winnie the Pooh book – the film is so richly textured, that at least half a viewing is required to fully absorb all the story has to offer.

The movie begins with an attractive black couple enjoying some time alone in their unassuming California home. The man appears to be some sort of beer-loving pipelayer while his wife is a nature-loving kitten freak. This house is the location of the genesis of the blob and the couple stupidly uncorks the canister containing the curious crimson goo. We watch as a creepy little cat crawls onto a counter courting the canister as if it were another feline. You want to scream at the kitten to leave that damn stuff alone, but alas, not only is the cat probably dead by now (the film was made in the 1970’s) but he is on the other side of the TV screen AND he probably only understands “meow” – the preferred language of cats.

While one’s initial analysis of the opening scene fits the stereotype that black people are the first to die in horror films, a closer look reveals that this couple is in fact an embodiment of the biblical Babylonians! The man lives in a pup-tent in his living room stacking beer can after beer can as he gets slowly inebriated: he is building a modern version of the tower of Babel. And the man is rather rotund, not unlike a Goliath. But who will slay this Goliath and teach him that he has taken science too far? Admittedly, there really is no David in the film unless you view the Blob as David which is silly since he has no slingshot. Nevertheless, something said “let there be light” and the blob comes out devouring the cat, then the lovely wife, and then the pipelayer.

At this point, it should be mentioned that Dick Van Patten represents the wandering Jew in this film. His New York accent seems out-of-place as he leads a group of rambunctious scouts to seemingly nowhere. You feel like he may of killed his brother as a youth (like Cain did unto Abel) and has been sentenced to wander for the rest of days…until he meets Christian justice in the form of a red blood. Yes, I think the blob may represent Christian justice although it doesn’t seem to carry those fancy shields that the Crusaders had. It should also be added that the wandering Jew is a Christian myth born from their medieval anti-Semitism. Why they had to create a red blob to overtake L.A. is beyond me.

The protagonists of the film are Lisa and Bobby, an attractive young couple who anger the local capitalist (read Pontius Pilate) and never have sex. This is an important detail as everyone knows that having sex in a horror movie spells certain death. I’m pretty sure they represent Noah and his wife and they are trying to gather townspeople to fight the Blob. So perhaps the Blob is neither David nor a crusader, but a flood: a flood of red pudding stuff that requires that Lisa and Bobby get in their jeep and go to a bowling alley/ice rink to save Los Angeles.