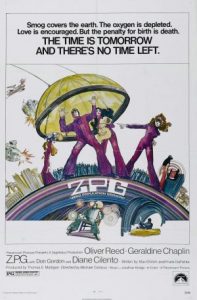 I love dark sci-fi films–particularly those that portray a dystopic future (where society is horrid and NOT the nice Star Trek sort of world). “1984”, “Soylent Green” and “Brave New World” are just a few dystopias that I adored–so I really, really was hoping I’d love “ZPG”. However, sadly, the great story idea was completely undone by horrid directing…and I mean horrid.

The film is set sometime in the future–and apparently in the near future. Disease has been virtually eliminated and the resulting population boom has made the planet unsustainable. Most animal life has been destroyed and the air is semi-toxic. And so, to try to stop the rapid decline of the planet and feed everyone, the governments of the Earth implement a new program–making having children illegal for the next 40 years. And, a young couple (Geraldine Chaplin and Oliver Reed) are determined to somehow have a baby and not face immediate execution. I loved this story idea–and it really was strongly reminiscent of “Soylent Green” (a great film).

So why if I loved the plot idea did I give the film only a paltry 5? Well, the director did a particularly lousy job. The film completely lacked life and emotion–and it felt as if almost everyone was half asleep during the film. You’d think there’s be LOTS of emotions concerning this birth edict…but Chaplin and the rest muddle through the film in a somnambulistic state. It could have easily been renamed “ZPG–Zero Plot Growth”! And this completely sterile and muted look of the film can only be blamed on the director–especially since the film had some very talented actors (in addition to the leads, Don Gordon was quite capable). I would really love to see this film remade–as the film should have been a clear winner.