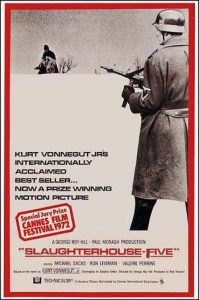 Kurt Vonnegut was more than worthy of the National Book Award that he received for the novel Slaughterhouse Five, but his humor and literary expertise are often lost in screenplays.

This flawed movie was a cult classic since its release because legions of Vonnegut fans were so fond of the novel that they could overlook the film’s flaws. This is probably the only Vonnegut novel to make the transition to the screen as a movie that more than a handful of people are willing to watch. And they watch it again and again. I am reminded of Voltaire lovers who enjoy Leonard Bernstein’s Candide. This seems to be the best of all possible Vonnegut movies.

There is a wealth of trivia associated with the cast. Michael Sacks disappeared into obscurity. Sharon Gans joined a community theater company that seemed more like a cult. Holly Near became a feminist folksinger. Valerie Perrine would later give a great performance as Honey Bruce in Bob Fosse’s Lenny. Perry King and Ron Liebman became minor stars.

The story is largely allegorical. It is not science-fiction. Vonnegut is coping with the trauma of World War II, particularly the horrors he witnessed during the firebombing of Dresden. Billy Pilgrim’s emotional numbness and alientation are characteristic of combat fatigue or post traumatic stress. Despite the lack of a chronological plot, Billy Pilgrim’s arc is linear.

To the uninitiated, being “unstuck in time” can be confusing. It’s sort of like one’s first encounter with hypertext. Perhaps, that’s why the movie is better on the second or third viewing. The key to enjoying Slaughterhouse Five is to focus on the best scenes and performances — much like Billy Pilgrim’s advice on living.