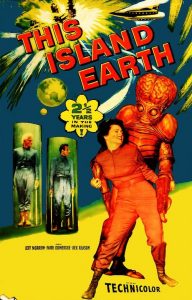 This is a great treat from a wonderful era of Sci-Fi. Those who complain of the hardware aspects have no romance – an Earth scientist receives an unsolicited manual and roomful of parts to build a futuristic two-way TV, but the parts are a marvel and the pages of the manual aren’t paper, but some manner of flexible metal. After constructing the “Interociter”, our hero receives a broadcast from Exeter, a fellow scientist with a suspiciously prominent forehead, inviting him to join his research team of the world’s greatest experts in their fields. What follows is a comic book come-to-life, and in vivid, 3-part Technicolor! This film is beautiful to look at, and apparently many of today’s best Sci-Fi filmmakers did. Rex Reason is fine as our hero, Jeff Morrow is one of the most memorable aliens of the era, and Faith Domergue is a fine actress and is mysteriously one of the most unsung beauties ever. And as to the hardware, the special effects, etc – there is actually nothing to complain about at all…the spaceship, the planet Metaluna, aliens, etc, are not merely passable for the 50’s, they are compelling by today’s standards. If you have just a bit of imagination, this is one of the best Sci-Fi classics of it’s time, and still makes many contemporary efforts pale in comparison.