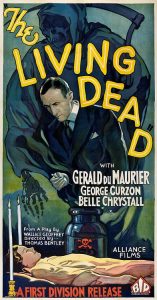 This film was called THE Scotland YARD MYSTERY in Britain and THE LIVING DEAD in America. IMDb is incorrect in saying of the film that ‘A mad scientist devises a formula that puts people into a zombie-like trance to do his bidding’. It is not a mad scientist who misbehaves, it is a criminal medical doctor named Dr. Masters, played with an insidious, brazen and unctuous arrogance by George Curzon. Nor does he put people into a zombie-like trance, and nor is the film anything whatever to do with hypnosis or trances. Curzon is a medical adviser to Scotland Yard. Unknown to his law enforcement friends, he runs a secret racket whereby he injects certain people with a serum he has devised which puts them into a state of catalepsy, where they appear to be dead. He then can revive them with a counter-serum later. He uses this technique to fake people’s deaths and claim on their life insurance. The star of the film is Gerald du Maurier, who plays Commissioner Stanton of the Yard. Du Maurier was the son of George du Maurier, who wrote the famous novel TRILBY and introduced the world to his sinister character Svengali. (That novel has been filmed many times under various titles.) Gerald was also the father of Daphne du Maurier, who wrote REBECCA and many other famous novels, which have been made into many films over the years and are too well known to require mentioning. Gerald was a famous stage actor who only made nine feature films and one short, few of which I believe survive. This film was released in 1934, the year he died, aged only 61. (Daphne was 27 at that time.) It is good to see Gerald at work, as he was a masterful screen presence, of which so little evidence exists today. I would hate to think of him becoming forgotten. This film is creaky because of its age, but it is a good ‘un.