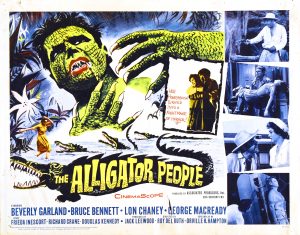 With a crazy title like “The Alligator People” this late ’50s shocker is much too vulnerable to jokes and attacks, and that’s unfortunate because it’s actually much better than you might think, and the subject matter is taken quite seriously. Beverly Garland plays a newlywed wife named Joyce who despairs when her husband (Richard Crane) ducks off the train they’re honeymooning on to make an urgent phone call, and then is never heard from again. Desperate, she tries without success to locate him until she eventually gets a lead that he could be at a house secluded off in the swamplands of the Louisiana bayou. Once there she is made aware of unusual experiments gone awry which involved her husband, and faces the horror that he is gradually turning into a scaly reptilian creature. His mother (Frieda Inescort, who’s pretty bad in this) tries to discourage Joyce in her search and at first does not give her a welcome reception.

Miss Garland is quite believable and sincere in her part, and this is a nice-looking black and white film shot in the cinemascope process, showing off some nice imagery in the land of alligators and snakes. Also adding to the experience is Lon Chaney, one of the uncouth local Cajun men who sports a hook in place of his left hand, having been a victim himself of an alligator attack. He never lets these “dirty, stinking gators” forget it either, as he constantly gets drunk and fires his gun at them, and tries to run them down with his jeep when they cross the road. One of the best lines in ’50s schlock cinema may be when Lon yells to the human victim of the story: “I’ll KILL you, Alligator Man… just like I’d kill any four legged gator!!”. Chaney is also involved in a violent rape sequence, which is pretty shocking for those times.

The scaly makeup for Richard Crane in its early stages is pretty effective, but when he emerges in full alligator-headed form later on, the first instinct is usually to laugh. But this is a ’50s monster movie, after all, and many creatures of this era have been bizarre. Once you get past the initial sight of the Alligator Man, the result actually comes off not too bad at all. This is an enjoyable movie of its type for the period, and also comfortably short at only 75 minutes.