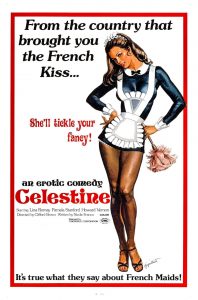 Italian sex comedy from Jess Franco actually has the same source of Luis Bunuel’s Diary of a Chambermaid but this here goes for way more laughs. The police raid a brothel and a prostitute (Lina Romay) escapes into the countryside. The woman, Celestine, ends up at a rich folks house where she ends up sleeping with two of the servants who then get her a job as a maid. Before long Celestine is sleeping with everyone trying to bring some joy to their lives. I was really letdown with this film after reading some positive reviews for it. Romay is cute and charming as always but the supporting cast, including Pamela Stanford, Monica Swinn and Howard Vernon are rather dull. There are some funny moments but not enough to fill the 93-minute running time. The best scene is when Romay is trying to rest in the morning but at least seven people show up for sex. Each time a new one knocks at the door she must try and hide the one she’s currently sleeping with. This here was my 90th Franco film (not including four alternate versions).