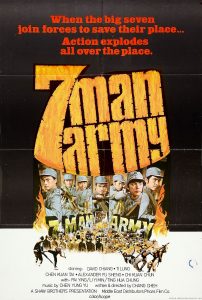 I saw this movie as the second half of a midnight double bill more than 20 years ago and it made a lasting impression. A group of brave Chinese martial arts fighters take a stand against the Japanese invaders during WWII in an impressive display of martial arts. So why didn’t the Japanese just gun them down? I guess there is no honor in defeating an enemy without firearms that way and that would have shortened the movie quite a bit. See it if you can, but as far as I know it is completely unavailable. There is not even a Hong Kong VCD release of it. This one is overdue for DVD release.