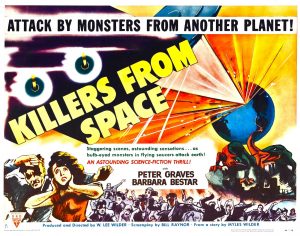 Circling over ground zero at the Atomic test site at Soladed Flats, to monitor radiation levels. The jet-pilot aboard flying the plane with Dr. Doug Martin, Peter Graves, loses control and crashes in the empty desert.

The next day at the military base where he lives with his wife Ellen, Barbara Bestar, Doug appears in perfect health with only a loss of memory of what happened to him in that plane crash and a deep surgical scar on his chest. Put under observation Doug seems so strange that the military brass, concerned that he may be a foreign spy, send his fingerprints to the FBI offices in Washington D.C to see if he’s an impostor. When they come back positive Doug is told to take some time off and stay away from the Atomic testing site which makes him very moody and upset.

One morning looking at the newspaper Doug sees that an Atomic test took place the day before at the Soladed test site, where he crashed at. Later that afternoon Doug sneaks into the office and opens the safe of Dr. Kruger, Frank Gerstel, a physicist who was at the test site and steals top-secret information about the blast.

Driving to the deserted test site that night when Doug is about to place a sheet of paper, with the Atomic blast information written on it, he’s grabbed by a civilian security guard. After Doug belts him he takes off in the night and with the police chasing him he crashes his car. Back at the base hospital Doug is injected with Sodium Thiopertal, truth serum. After going into a deep trance Doug tells those in his hospital room what happened to him after he survived the plane crash.

Doug woke up in an underground cavern with these strange looking aliens with huge bug eyes, that look like hard-boiled eggs, operating on him. Doug is told by alien leader that he was killed and that he was brought him back to life. Doug is also told that the aliens need him to get back to his army base and find out when the next Atomic test will be and return that information to them. Doug is also told that they come from a planet called Astron Delta that lost it’s ability to sustain life and they are planing to take over the Earth as their next home away from home. The leader also tells Doug that the aliens are also breeding huge insects and reptiles that will devour all life on Earth. After the insects ands reptiles finish the job the aliens will destroy them, with some kind of super-high sonic rays, and use their remains to fertilize the Earth. Thats so that they can live off the vegetation thats produced by them.

Told that if he does his job for the aliens Doug will be sent onto a space station and after everything is achieved by them ,in wiping out the human race, he’ll be brought back to Earth and live happily ever after. The last thing Doug can remember is him being told by the head alien to “Listen and obey you will obtain the data and bring it to the stone” like what he did earlier at the Atomic bomb site.

When Doug awakes from his trance the military men in the room think that he’s cuckoo and tell him to take a long vacation. Doug instead tells them to detonate an Atomic Bomb as soon as possible in order to overload the aliens circuits. But the military men tell him to go to back to sleep and that even if they wanted to do what he told them they don’t have enough time to do it. Doug later realizes that if he only shut off the power source, the local power plant, that the aliens are tapping into to get their power for just ten seconds it would cause their resistors to short-out. This would have their whole underground base would go up in a nuclear explosion.

Running out of the hospital to his car with only a robe and pajamas and slippers Doug drives to the power plant to shut off the power for just a brief while in order to save the world. Holding everyone at bay with a gun that he wrestled away from the pant attendant ,Lester Door, Doug shuts off the juice and in ten seconds the entire alien base goes up in a mushroom cloud.

Doug who was considered insane just a moment ago ends up saving the world as well as the whole human race. Not by following the orders of his superiors but instead the instincts of his mathematical and scientific curiosity.