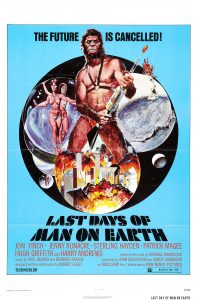 The novel from which this movie was taken, The Final Programme, by Michael Moorcock, is structurally identical in plot and character to another Moorcock novel… Elric of Melnibone, the first of the Elric series.

This is not a coincidence; both books are part of the Champion Eternal cycle… a series of interconnected series about the Champion Eternal, who exists in every time and every universe, condemned always to fight — and never know why he is fighting. He goes by many names — Elric of Melnibone, Jerry Cornelius, Count Urlik, Prince Corum, each with his own series. In some incarnations he knows who he is, in others he thinks he’s a normal man (occasionally, a particular incarnation is female). Sometimes two (or even three) incarnations meet each other.

The cycle, which makes up about a third of all Moorcock’s ouevre (probably dozens of novels), is one of the most monumental achievements of meta-fiction ever written… but I think this is the only book of Moorcock’s made into a movie, though he did contribute to the adaptation of the Edgar Rice Burroughs novel The Land That Time Forgot (dinosaurs on an island).

Now that Fritz Leiber is dead, Moorcock can lay claim to being the greatest living fantasy writer.

The movie The Final Programme (a.k.a. The Last Days of Man On Earth) does an incredible job of capturing the Jerry Cornelius character, much better than I would have expected. But the ending is changed from that of the book, and not for the better. Still definitely worth a rental.