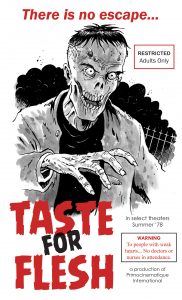 A couple lesbians are at home with their female guest when there’s a knock at the door. Before long two men are holding them hostage because they need to use their place to assassinate a foreign officer who will be visiting the building across from the ladies’ home.

A TASTE OF FLESH is a pretty entertaining quickie from Doris Wishman. At just 73-minutes the film never wears out its welcome and it actually makes for a good evening of cheap thrills. In case you didn’t pick up on it, this is basically a sexploitation version of the movie SUDDENLY, which had Frank Sinatra playing someone who took a family hostage so that they could arrange an assassination. The one thing this film has more of than that one is breasts.

What impressed me most about this picture was the B&W cinematography by C. Davis Smith. I thought the cinematography really captured the small setting and made for a claustrophobic feel. Another major plus is that Wishman actually created some very hypnotic scenes including one dance number that happens towards the end. Another impressive sequence, directing wise, happens at the start when one woman is in the bath and another walks in on her. Just check out the editing and handling of the woman in the tub.

There’s quite a bit of nudity throughout and there’s no question that the ladies are very beautiful. There are only five cast members and I thought all of them did a nice job in their roles. The music score is another bonus and those familiar with the intros to the Something Weird Video releases will certainly know the tunes here.