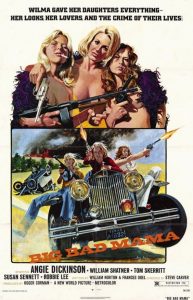 Imagine Bonnie and Clyde without Clyde and with more of a trashy B-movie style to it, and you’ve got an idea of what Big Bad Mama is like. With Roger Corman on producing duty, you’ve to expect some silly trashy fun, and this film delivers that in droves as it’s clear that nobody cared about making a credible film, which is usually good news for entertainment value. Angie Dickinson takes the lead role and makes good of it, as she carries the film with her engaging and enthusiastic performance. The film focuses on Dickinson’s character Wilma, who decides to go into bootlegging when her lover is killed. Along with her two daughters, Wilma travels across the country and eventually meets a bank robber named Fred, and the pair decides to put their relative talents to good use in order to ‘earn’ themselves some money. The support cast is good, with the likes of William Shatner, Dick Miller and Tom Skerritt being put to good use, while lesser known performers such as Robbie Lee and Susan Sennett also giving entertaining turns. The reason this film works so well is undoubtedly down to director Steve Carver’s focus on entertaining his audience. This does leave it feeling more than a little bit empty, but in a film where bank robberies, sex scenes, car chases and more feature heavily, this isn’t a big problem. Overall, if you fancy a fun filled eighty minutes or so – you could certainly do a lot worse than this little flick!