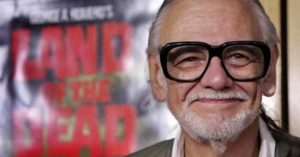 George A. Romero, the man who gave us zombies, allegory and truly independent movies passed away this week in Toronto at the age of 77. His passing has caused me to pause and reflect on the idea of an independent cinema.

Even in the beginning of the movies there was an attempt to stifle the independent. The independent early in movie history attempted to break away from the Motion Picture Patents Company and the steely grip of Thomas Edison; So many in order to escape Edison and the MPPC abandoned the East Coast. They decided to go west to a little community nestled in the orange grove near Los Angeles named Hollywood to in order to make their smaller budget films.

The Motion Picture Patents Company (MPPC) or “Edison Trust” was a cartel that held a monopoly on film production and distribution comprising all the major film companies of the time (Edison, Biograph, Polyscope Essanay, Selig, Lubin, Kalem,Vitagraph, American Star, American Pathé), the leading distributor and as well the largest supplier of filmstock, Eastman Kodak. Now there is some correlation to these practices and the business methods of the MPAA.

Eventually these small companies grew in the warm California climate and evolved into the major studios we know today. These studios soon started taking a page from Edison’s book which gave rise to the Federal Government suing the major studios and the issuance of the now famed Paramount Decree.

The Paramount Decree and increasingly portable equipment, which came into being as a result of World War 2 made it possible for any person in America with a passion to make a movie to make one. Now filmmakers could produce, and direct one without the participation of any major studio. Unlike the films made within the studio system, these new low-budget films could afford to take risks and explore new artistic territory outside of Hollywood. As a result of the new freedoms independent producer/director Roger Corman began to make movie after movie. His methods would become legendary for their basic cheapness and coupled with impossible shooting schedules. The films of Roger Corman took deep advantage of the fact that unlike the studio system, independent films had never been bound by the production code. Corman’s example help start a boom in independent B-movies in the 1960s, the prime goal of which was to entice the youth market back into the theatres and drive-ins.. The lure of sex, violence, illicit drug use, and nudity, these films drew audiences to independent theaters by offering to show them what the major studios could not.

In 1968, a young filmmaker named George A. Romero based in of all places, Pittsburgh produced a low budget horror film, Night of the Living Dead, (originally called Night Of The Anubis). Previously Romero had worked on Mr. Rogers Neighborhood, Beer commercials and films for the NFL.With the support of his production company, The Latent Image he managed to raise $114,000 to make his film. In 1968 this was a fairly risky venture with no guarantee of distribution, foreign sales, any television potential and a decade away before home video .

By making “Night of the Living Dead” in 1968, George Romero achieved something far beyond any of the indie outsiders had ever done. Most independently-produced films made outside of Hollywood were happy to make a small profit and gain marginal exposure. Night Of The Living Dead was spurned by all major studios. Eventually small time distributor Continental Distribution agreed to pick it up The distributor was owned by a theatre chain Walter Reade Theaters. Continental had made a name for itself by releasing European films, including “Mon Oncle,” “Room at the Top” and “Lord of the Flies.” When they saw the interest in European product waning they had started branching out into exploitation and drive-in fare

Continental was willing to take a chance with Romero’s film, even with its low production values and black and white photography. Its release was bicycled with the movie playing in different markets at different times. But the movies, power and unique message and style made it an immediate sensation primarily due some great word of mouth advertising.

Night Of The Living Dead enjoyed a box office gross totaling $12-15 million for domestic market, that equates go to between $80-100 million today. “Night of the Living Dead” also had far-reaching impact. The success of the movie was noticed and financiers became eager to back other independent films.

Now most newly successful director having shown that they were bankable would immediately pack their bags and move to Hollywood but not George. Romero stuck to his Pittsburgh roots while trying to keeping making movies his way. work. For the next two decades all his films were produced in Pittsburgh. 1977’s “Martin” remains one of his most respected films. “Dawn of the Dead,” with a budget set a 7 times ten times more expensive than “Night” and it was in color grossed over $200 million worldwide in today’s number . It remained an independent release, which had a lot to do with Romero being able to could keep control of his vision. If it was released under the regime of the MPAA the rating no doubt would be X

He followed with his non-horror “Knightriders,” which did not have great success. Continuing to use his own production company and attracted the attention of Stephen King . Together they made the anthology horror film “Creepshow” , with a major studio handling distribution.

In order to maintain his independence, Romero returned the familiar realm of truly independent movies with “Day of the Dead,” his third zombie film. It did far better overseas than domestic, but justified his decision to separate himself from working within a corporate shell. His fears were more than warranted.

In 1988 Orion took“Monkey Shines” away from him, proving his independent instincts correct. Orion changed the movie’s ending and shortened Romero’s cut of the film in an attempt to create a conventional movie.

To the end, Romero remained an independent visionary,. He resisted selling out, he kept his vision under his own control, his name became synonymous with horror for the foreseeable future, For many of us, He remained true to his Pittsburgh/Anti-Hollywood roots,. Romero was the filmmaker who personified the ideal that you didn’t have to be in Hollywood to make films that attracted wide audiences. He continues to be a lasting example of the idea that Hollywood needs to be re-energized from by independents.

He shall be missed.