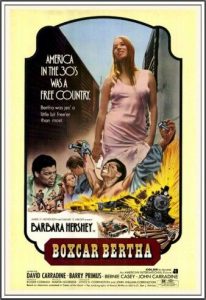 Rumor has it Martin Scorsese showed this film, his second, to John Cassavetes, who labeled the movie “sh*t” and suggested Marty work on more personal projects in the future. This advice prompted Scorsese to direct Mean Streets, the first of his many masterpieces. Boxcar Bertha is not one of them, but it isn’t as bad as Cassavetes stated, either. It’s an average B-movie of the kind Roger Corman would offer to his students (Marty among them).

Plotwise this picture has a more defined structure than Who’s That Knocking at My Door: the setting is small-town America, the Great Depression is far from over, and a young girl named Bertha (Barbara Hershey) joins union leader “Big Bill” (David Carradine) in a violent protest against the people who are managing a railroad. When things turn ugly, the two lovers are forced to run for their lives, while still hoping they will prevail.

Hardly an original story (it’s essentially the poor man’s Bonnie & Clyde), but Scorsese does his best in making it appealing to audiences, shooting in beautiful countryside locations and obtaining strong performances from Hershey (who would later play Mary Magdalene in The Last Temptation of Christ) and Carradine, most notably in a sex scene that, according to everyone involved, was not faked.

Beyond that, though, it is obvious Cassavetes had a point: there is nothing that gives Boxcar Bertha that unique Scorsese feel. He just did his job without finding anything in the script he could connect to; even the religious iconography used in the bloody climax seems to have been tucked in for no particular reason.

Still, the film is enjoyable and worth seeing, even just as the product of a young filmmaker still shaping into the master he was to become.