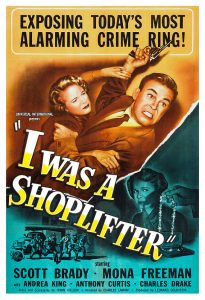 Principal roles in I Was A Shoplifter fell to Scott Brady (Lawrence Tierney’s brother), the evergreen Mona Freeman, Andrea King and the young `Anthony’ Curtis. Smaller, almost invisible parts go to Charles McGraw, Peggie Castle and Rock Hudson. That’s not a dream cast, but all had done and would do better work in far better vehicles than this dead-serious and deadly dull documentary-style look at `boosters’ – organized shoplifters.

Mousy librarian and prominent judge’s daughter Freeman saunters through a big department store absently filling her pockets with trinkets, like a magpie flying off with anything that glitters. She’s spotted, hauled into the manager’s office and forced to sign a confession. Also caught in this retail dragnet is Brady, a professional booster as opposed to Freeman, who’s written off as a `klepto’ – a basically harmless nuisance.

But later Freeman has visitors. The first is hard case King, who has a photocopy of Freeman’s confession and blackmails her into joining the her nest of boosters; the second is Brady, who works undercover on a police task force trying to crack the ring. He falls for her, as does, more brutally, Curtis, one of King’s torpedoes. The `action,’ such as it is, moves south to San Diego then crosses the border to Tijuana for an (almost) final reckoning.

Laughably, the shoplifting syndicate operates on a level of ruthlessness and secrecy on a par with the Nazis in The House on 92nd Street, the heroin smugglers in To The Ends of the Earth, or the Communists in The Woman On Pier 13. But I Was A Shoplifter has been picked clean of wit, style and suspense; it stands as a grim example of a particular post-war posture of humorless self-importance, passing itself off as entertainment.