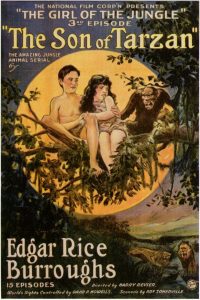 A complete print of this serial, containing one of filmdom’s most persistent urban legends, is now available, though a bit ragged in spots (missing frames, “sprocket jitters,” etc. My copy is missing most of the musical soundtrack as well). I recommend it to the Tarzan fan, casual and completist, and to any silent movie fan. As has been noted on many occasions, P. Dempsey Tabler is quite woefully miscast as Tarzan (here known in the civilized world as Lord Greystone instead of Greystoke); fortunately he remains in England until near the end, allowing Kamuela Searle to enthusiastically carry the bulk of the picture as Jack Clayton, aka Korak (“Killer” in the language of Burroughs’ Apes). Manilla Martan, as Meriem, Korak’s damsel in constant distress, is also well-cast, and in those pre-Hayes Code days, gets away with a bit of nude bathing.

Most will see this serial having heard of Searle’s death following the infamous elephant rescue. This has been debunked by Burroughs enthusiasts, who quote a letter from Searle’s brother to “The Burroughs Bulletin,” stating that though badly injured when the elephant slammed him to the ground still tied to a pole, Kamuela recovered, but died in 1924 of cancer.