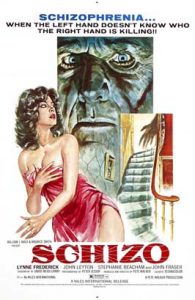 On one hand, Pete Walker’s psychological horror Schizo is a pretty fun time-waster, boasting decent performances, some delightfully gruesome killings (best of all being a knitting needle in the head—implausible but cool), and a touch of nudity courtesy of its lovely star Lynne Frederick, who plays Samantha, a recently married premier ice skater who finds herself terrorised by menacing weirdo William Haskins, recently released from jail for the brutal murder of Samantha’s mother.

On the other hand, the film is a little bit too long for its own good, stretching its rather thin story-line to breaking point, and you would have to be crazier than this movie’s killer not to work out who is responsible for its bloody murders: given the film’s blatant title, Walker’s final twist is far too easy to guess, making this a far less effective thriller than it otherwise might have been.

Ultimately tipping things in its favour are Walker’s assured direction, a decent supporting turn from Hammer babe Stephanie Beacham, some unnecessary but entertaining occult nonsense, and an unmissable appearance by the world’s most hideous wallpaper design (at least four designs in one, all of them horrible).