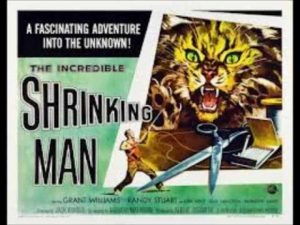 This is simply a superb science-fiction drama of a couple’s prosperous 1950s world turned upside down. Vacationing on a boat, while the wife Louise (Randy Stuart) is below deck, husband Scott Carey (Grant Williams) above becomes exposed to a radioactive mist, that changes his body’s metabolism (“anti-cancer”). Critics question why the mist did not affect others, including the wife, but the doctor’s (Raymond Bailey) explanation later is that Carey was accidentally previously exposed to insecticides, the 2 compounds in his system reacted together to create the phenomenon. (This idea was used in “The Leech Woman” – 1960, also with Williams, where fluid from a male pineal gland had to be mixed with a floral powder to achieve youth). As a kid, I was in awe with the attacks from an ordinary cat and a spider, but as an adult, one feels great sympathy for this character, and his family. Williams, a handsome Nordic blonde, gives a beautiful performance, and narrates over much of the film which later has no dialogue, but greatly aided by a magnificent score; the title piece is haunting with its Trumpet solo set against an advancing cloud that gets bigger while the human frame dwindles. Stuart is terrific as the suffering wife, faintly resembling Dinah Shore, she even co-starred with Shore’s ex-husband George Montgomery in the following year’s “Man From God’s Country” – 1958, her last film. April Kent (daughter of actress June Havoc, did she have a sister named May?) is warm and sympathetic in her two scenes playing a midget (although not) when Williams is 3 feet high, a poignant interlude. The special effects are supremely done. The first 3 words of the title have become part of our culture, even recently a major magazine heading stated “The Incredible Shrinking…” on its cover. Director Jack Arnold paces beautifully, Richard Matheson script is intelligent and the closing scenes have a soaring, wondrous quality that few films have ever matched.