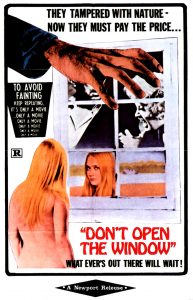 On the video nasties list as simply The Living Dead (it has several other titles), I watched a version called Let Sleeping Corpses Lie, it is pretty difficult to see why this was on the list to begin with. Yes it has some gory moments, but nothing that is close to the opening of people as, say, The Boogeyman (1980), which was dropped from the DPP’s (Director of Public Prosecution) list of films that were prosecuted and eventually banned. But then again, there are many strange entries on the list, as we will discover over this project.

The Living Dead begins with the serendipitous meeting of George (Ray Lovelock) and Edna (Christina Galbo) at an isolated garage. Two individuals traveling up north from “that London”. Already condemned when they arrive in a small village, what with their hippie looks, they would most certainly be crazy drug-addled satanists. But something more sinister is occurring, as the living come back from the dead to eat the living.

Well, of course it’s a zombie flick! It’s implied in the title! It’s not the greatest of films by a long shot. But it is a well-made film. The “message” is ecological; the culprit behind this macabre situation is an experimental machine from the department of agriculture, that emits radiation to combat insects etc for crops. Damn you government, with your ill-conceived ideas of progression!! The film does also produce a pretty amusing line from ‘The Inspector’, Arthur Kennedy; “I wish the dead could come back to life. Because then I could kill you again”.