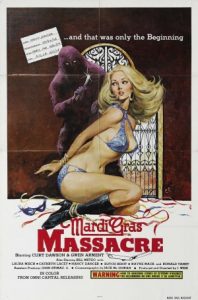 From the perspective of yet another guy who’s trying to see all the ‘official’ video nasties – namely me – Mardi Gras Massacre passed the litmus test. It offers another dose of the very particular atmosphere unique to a lot of no-to-low budget shock horror films from the seventies and early eighties, in this case involving one crazy devotee of a Mexican death goddess who ritually sacrifices (disembowels) a series of prostitutes in New Orleans pre- Mardi Gras. While I was satisfied in a broad sense, I can’t stress enough that Mardi Gras Massacre is an extremely incompetent film, both hilariously and tediously so. It’s riddled with the kind of woeful technical blunders I thought had ceased to be with the underground exploitation flicks of the sixties and early seventies. I’m talking about tons of non-featured actors clearly reading their lines from cue cards held just off camera. I’m talking about actors not being given another take even after they’ve fluffed multiple lines of dialogue. I’m talking about the kind of continuity screw-ups in which a person can be standing, then sitting, then standing again in consecutive shots. During an arguably important chase scene of the villain by the cops, the actor playing the villain is curiously absent. A series of long shots of scenery and of anonymously driven cars appear to be intended to cover up this omission. (Maybe the guy wasn’t paid to stay on the set that long?)

Technically, it is all that bad, but of course there’s content to entertain. There’s real New Orleans scenery, lots of crass discoey glitz, badly amusing dialogue (“I hear you’re the most evil woman in this room,”) a cheesefest love montage between a cop and his newly beloved prostitute, and several cheap but plenty splattery disembowelment murders. The killings are all executed identically in editing and FX, which is a curiosity for this genre, as well as just something which kind of sucks. But I did find effective the grizzly synth score associated with the bad guy and used during the lead up to each of the sacrifice scenes.