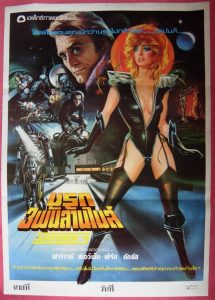 In the future, Earth is overcrowded and the population relies on distant bases to be fed. In the Saturn 3 station, Major Adam (Kirk Douglas) and the scientist Alex (Farrah Fawcett), who is also his lover and has never been on Earth, have been researching hydroponics for three years in the base alone with their dog Sally.

Meanwhile, the psychotic Captain Benson (Harvey Keitel) fails the mental test required to travel to Saturn 3 and kills his replacement, Captain James, taking his place in the mission of assembling and programming the Demi-God series robot Hector to replace one of the scientists in Saturn 3.

On the arrival, the mentally disturbed Captain Benson becomes sexually obsessed for Alex. Then he uses an interface to link his brain to program Hector, but incapable to control his emotions, he transfers his homicidal tendency and insanity to Hector. Now Major Adam and Alex are trapped in the station with a dangerous psychopath robot.

“Saturn 3” is an underrated sci-fi cult from the 80’s with a dark story that has not aged. The plot is very simple but creepy and the cast is very well selected: Kirk Douglas very mature but still handsome, convincing that Major Adam is capable to seduce Alex. The underrated actress Farrah Fawcett in the top of her beauty and showing parts of her body, seducing not only the psychopath Captain Benson but ( I believe) most of the male viewers. And Harvey Keitel is perfect as a mentally unstable man with sex drive on Alex. The non-commercial conclusion is also excellent and perfect for the story. My vote is seven.