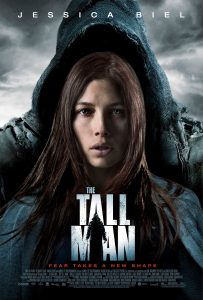 Making its Stateside debut, Pascal Laugier’s “The Tall Man” was the grand finale to a spectacular constellation of fine horror films. “The Tall Man” however, is not like a “PSYCHO” or “SE7EN” in which there are creative forms of torture served for your viewing pleasure, this film has an art house feel to it that leads into the bowels of depravity. It’s demonstrates how evil man can be for the sheer pleasure of outright aberration. It reminded me of a brochure that I received depicting the horrors of how animals are slaughtered for human consumption. If that is a brochure you’d rather not digest before dinner, “The Tall Man” is the type of film you may not want to view on a full stomach. Brilliantly executed in ways better described only as experimental, Pascal Laugier takes us to the end of the tunnel, the last stop, to a place where there is no longer any separation between humans and animals, predators or prey, it’ a place so dark, you will no longer have to imagine for now it has been recorded on celluloid.

“MARTYRS” or any other torture porn created to date has nothing on “The Tall Man”. Why? Because they Canadians know their cinema business like no other. They leave nothing up to the imagination and nothing is too taboo for them whereas here in America, filmmakers tend to like to draw certain lines when it comes to making horror films for shock value. “The Tall Man” is one of the few crossover films that could play at a horror film festival, as well as a intellectually artsy festival or a gay & lesbian festival alike. It covers the gamut in storytelling and that is what makes this film so powerful and so inherently haunting ,it will carve many putrid memories in your phsyque long after viewing. I would not recommend this film to folks with weak stomachs.