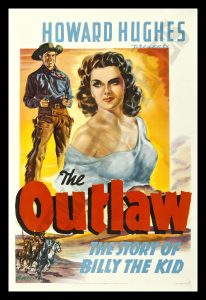 I would have preferred if there was no plot at all – Jane Russell is gorgeous, and Howard Hughes’ meticulous efforts to emphasise her considerable bust make her quite a thing to look at. I would have preferred to see less of Pat Garrett and Doc Holliday, and more of Jane Russell. Even in the circumcised 95 min version i saw, there are shots of her cleavage, very rare for a 1943 film. There are other aspects of the movie which make it racy even by today’s standards: one scene which made it to the most censored version involves something we don’t see again till 1970 (Altman’s MASH), far as i know. A man is sick, Russell is told he may die, she starts undressing, tells the maid to leave the room and tells the sick man: “I’ll warm you up.”

At times like this, there is a total fadeout to black and the music cuts out – something which never happens elsewhere in the movie. Its not hard to pick where bits have been cut out. I’d love to see the full version, available on the Criterion DVD. Plus, the transfer on the cheapie DVD i’ve got is not good, and Criterion always do a great transfer.

The sex caused the production enough trouble, however – getting it banned in several countries, and neutered in the US. Still, there are enough scenes of Russell looking gorgeous here to recommend it to you for that alone (best bits: Russell standing in front of a mirror, riding a horse, wearing that green shirt, getting wet… you get the idea). The shot of Russell in The Outlaw’s photo gallery gives you an idea of the sultry sexuality Russell had. That’s a publicity still, though, so she looks slighty more natural in the movie. The western-adventure plot is impoverished and eventually turns into a love triangle with Russell, which i would have recommended to Hughes instead of trying a straight western adventure. He clearly cared most about women and aviation, and since this movie involved no planes, he needed plenty of sex to keep him interested. Hughes’s frame only comes alive when Russell is on screen. Luckily, she comes on screen quite often. Still, it never seems like enough. The only interest the other characters (none other than Pat Garrett, Billy the Kid and Doc Holliday) serve is watching how often their eyes stray to Russell’s bust when they’re in a scene with her.