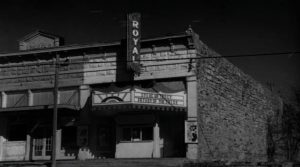 It is May 23rd, 2025. It is the Friday of Memorial Day weekend. This is the first weekend of summer for the year in which the major studios have decided to skip releasing any product directly to the theatres. Box office, which for the past decade has seen a 6% loss of ticket sales per year is now in the year of 2024 at $5 billion per year in the United States. By comparison Video On Demand now generates over $100 billion per year globally.

Physical mediums like DVD and Blu-Ray were ceased being made in 2021.

With the failure of the laser projector push in 2019 coupled with the chains financial over extension as result of the studio mandated adoption of 4D in 2021, the market began to see a series of fatal bankruptcies. Many independents, tired of the financial commitment merry go round, just threw in the towel. Regal was crushed by the 90% failure rate of the retail mall sector and AMC got decimated as a result of the collapse of Chinese currency market. With the Yuan being devalued by 80%, AMC’s parent company saw itself being eradicated by the removal of its operating line of credit. Regal and AMC’s theatres stood empty and silent….its stadium seating and 4k projectors began to gather a layer of dust. Soon, new formed churches and flea markets would fill the space with anxious landlords hoping for a miracle. None would come. The top 10 mall operators all had to file for either bankruptcy or re-organization. Only the mall operators with a diversified base of property interest were able to hang on.

China in its concerted effort to yield soft power in the global entertainment market has over reached its target and has suffered the consequences.

From a peak of 40,000 screens, now only 7,000 screens remain. The studios had been on a program of almost eliminating its booking operations; all bookings had been centralized in Los Angeles. In 2023 the last offices were closed down and all booking was placed in the hands of either Deluxe or Technicolor. With the dominance of satellite delivery into the theatres in order to save the cost of the bandwidth the studios abandoned the DCP standard. A new edition of the MPEG protocol was created with the ability to apply an individual KDM for individual theatres and film titles. With a compression rate which allowed DCP quality with one 20th of the file size….studio heads were giddy with the cost savings. It also helped that this technology could be applied to home delivering: clearing up the most publicized fears regarding piracy.

Overseas, many government bodies had seen the impending impact of the collapse of the theatrical exhibition sector. They saw the romance with the Chinese as a more than dangerous game. Governments interjected themselves and took away reliance of the virtual print fees. They encouraged exhibitors to rely more on local product. Many took the advice and as a result began to see a steady rise in theatrical box office. In these markets the theatrical window held its ground. By avoiding the machinations of the MPAA and building on a local base they saw strength, growth, and stability. From a high of pretty close to 85%, Hollywood produced product now only enjoyed on average a 15% market share in 2025 with its product.

Prompted by the collapse of the two largest chains, Hollywood in 2023 announced a reduction by 70% of product intended for theatrical release. Collectively the major studios now were only going to release 14 of their titles. The United Kingdom, already reeling from the collapse of the AMC chain, saw an immediate public backlash. The Labor government launched a suit against all members of the MPAA charging them with market manipulation and violation of the Competition Law of 1998. The Competition and Markets Authority (CMA) found the major studios in violation, The ruling is now in appeal. Several other countries: Germany, Italy, France, and Spain followed suit. Attempts are being made to apply the same law to the business practices of Netflix.

Many small communities saw the end of movie going, in many cases theatres had been projecting movies for audiences since the days of vaudeville. Hollywood decided in 2024 to solely release its title only to theatres which had large format screens, like IMAX. Various approaches were tried including going back to the spoke and hub of initially releasing in downtown cores, but they all failed. The manipulation of the theatrical windowing had trained audience to wait 30 days before they saw their movie. Audiences were no longer interested in new Hollywood releases. In many minds, Hollywood abandoned their theatre so why not abandon Hollywood.

On December 1st, 2024 , all the studios announced they were going to cease all US based theatrical operations as of January 30th 2025. The remaining 7000 screen owners panicked, some re-invented themselves as community operations others just shut down.

In January 2025 , in various earning statements, video on demand revenue decreased for the first time by a shocking 11%. Industry prognosticators brought forward all kinds of theories on the decline, most felt it was temporary. The next three months saw similar market weakening.

In countries where rights to movies were sold by territory, theatrical exhibition still continued but further reliance was put on local productions. In England, the Open Air Cinemas tripled in size. Every weekend thousands upon thousands flock to gardens, abandoned factories, and struggling malls to watch primarily classics from the 1980’s. The studios attempted to block access, but with the impending Government lawsuit they thought they would not press the point.

In the USA with it’s varied climates and less Government interference public screenings did not take hold. In April when the snow has made it’s retreat, a group of colleges began to host screening under exemption of studio rules regarding educational licenses. Thousands flocked to the screening. Soon every educational body was screening older movies, using Blu-ray as the medium, since access to newer releases was denied by the studios.

It is May 2025, Memorial Day weekend. This weekend millions of Americans will be watching movies like Jaws and Back to The Future under the stars at campuses across America. Sitting in lawn chairs and laying on blankets, these people, these Americans will know what was lost due to short shortsightedness by an overly greedy approach to business and will declare their cinematic independence.