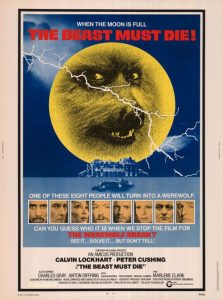 The film concerns on Tom Newcliff (Calvin Lockhart) , a wealthy businessman , great hunter and sportsman living with his wife (M.Clark) and his foreman (Anton Driffing) at a luxurious mansion . He has pursued and hunted all kind species with exception a werewolf . Thus , he invites a group of six men (Peter Cushing , Charles Gray , Michael Gambon..) and women related with weird killings about the eating of human flesh and nobody can leave the location . One of the occupants turns into werewolf at the full moon and stricken a rare pollen flower . Then , he undergoes a dental and hirsute transformation at night and going on a murderous rampage every time the moon is full . Tom investigates the guest who converts in night beast and trying to chase him , increasing his enormous collection at his isolated lodge .

The movie is a detective story in which you are the detective . The question is not ¨who is the murder¨? but ¨Who is the werewolf¨? . After all the clues have been shown we will get a chance to give your answer . The picture is a crossover of Blaxexploitation’s protagonists , Agatha Christie whodunit (Ten little Indians) , horror mythic about werewolves and even gimmicks -William Castle type- on its intervening period when give to public some seconds for resolving the strange enigma . The transformation of man into werewolf is simple without special effects . Calvin Lockhart as obstinate and relentless hunter is top-notch ; besides , being surrounded by a highly capable secondary cast . Special mention for Peter Cushing ,as always he is excellent as specialist of knowledge on Lycanthropy . The screenwriter provided a very serviceable and well-knit screenplay with suspense and tension , giving full rein to director Paul Annett’s natural talent .