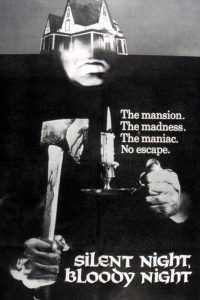 I love discovering new-to-me American horror flicks of the 1970s. These independent, backwoods-shot productions usually showcase some then-startling gore effects, as well as creepy atmosphere and a sense of gritty realism usually absent from the slicker Hollywood productions. SILENT NIGHT, BLOODY NIGHT fits the bill as an all-but-forgotten movie from this era, but sadly it turns out to be anything but a gem. Saying that, this early slasher flick even manages to pre-date Black Christmas by a year, and HALLOWEEN fans will find much of interest in the p.o.v. killer shots and the eerie atmosphere that highlight this unusual little movie.

The film was obviously made on the cheap, and in many places things are far too dark to see what’s going on. Despite the best intentions of the filmmakers, this film’s a chore to sit through. The story is slow beyond belief and the narrative stilted and mishandled; the editing of various scenes is done in such a way to make even the simplest shots confusing to the viewer. In essence, it’s about a creepy old abandoned house that may be home to a murderous lunatic, plus some back story about an old asylum. The plot itself is fairly simple and uneventful, at least until the final denouement which has a classic twist of an ending. As is usual for most ’70s horror flicks, there’s a little gruesomeness, including a double axe murder and a broken bottle in the face, but nothing too off-putting for seasoned buffs who like their horror of the older, more classic variety. One of the most positive aspects of the film lies in director Theodore Gershuny’s work – there are some genuinely inventive moments, enhanced by weird camera angles, and an excellent flashback sequence involving inmates taking over the asylum in which things get really spooky and eerie.

The story is cheaply acted by a bunch of no-name or cult stars such as Warhol favourite Mary Woronov. Guest star Patrick O’Neal doesn’t hang around for long, while John Carradine doesn’t say a word! Leading actor James Patterson was dying of cancer while the film was being made, adding a further level of grubbiness to the thing. SILENT NIGHT, BLOODY NIGHT is a very obscure movie, and it’s easy to see why; low budget, quite similar to dozens of others, and with no big names to market it. Despite these factors it works in places and provides a fair few chills during the short running time.