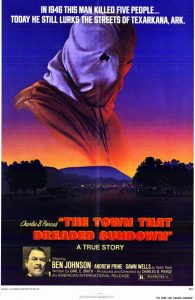 Set in the late 1940’s Texarkana, Arkanasas. The residents of a small peaceful town are terrorized by a mysterious hooded killer. Who’s been stalking and killing random victims during the night. When the police from the town are hopeless and confused by the terror. A professional detective from Texas, Captain J.D. Morales (Oscar-Winner:Ben Johnson) arrives in Texarkana to help the police office. Who is also charged in the case is Deputy Norman Ramsey (Andrew Prine). Although these vicious, then unusual crimes stopped as quickly as they begin. Morales and Ramsey are running out of time.

Directed by the late Charles B. Pierce (Bootleggers, The Evictors, The Legend of Boggy Creek) made an well made horror film that is occasionally scary and suspenseful. This sometimes, unusual movie is also narrated by the late Vern Stierman. Which is surprisingly effective, when it is used. Pierce himself appears in a supporting role as Patrolman A.C. Benson. Who is the comic relief of the movie but that’s the only complain of the movie. Sometimes, i felt the film’s sense of humour sometimes hurts the effectiveness.

Since the movie is only available in a bootleg release. You can find this movie in Full Screen or Widescreen. You are better off finding this in Widescreen. Since it is extremely well shot by James W. Roberson in Panavision. The movie is also gimmicky at times, especially during the conclusion. Since this picture has become an Cult Classic over the years. Now…There’s an remake in the works and it might be shot in 3-D! If you haven’t seen this, this is worth seeing. The look of the hooded killer is giving homage later in “Friday the 13th Part 2”. The killer in this movie, who is truly scary is played by stuntman Bud Davis as the Phantom Killer.