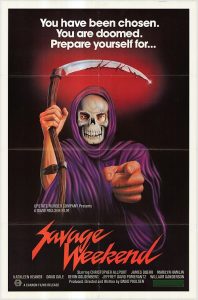 Urbanites spend weekend at a country house where they are menaced by some weird locals and one masked killer.

If it were not for the dragging pace of this B horror flick, it would have actually been a much more entertaining movie. As it is, there’s about 50 minutes of set up but little pay off for this talky low-budgeter. The best thing about this early slasher is its gritty country atmosphere, but the creeping pace and tacky characters weaken this movie (seriously, what was with the ridiculous tango/striptease dance?). There’s little blood and the murder sequences are poorly edited, censors to blame perhaps? The lousy music score doesn’t help matters either.

Still there’s an enjoyable performance by William Sanderson as a strange handyman and an amusing scene involving a victim tied to a table saw. Plus, it’s hard to stifle a laugh as our masked killer paces around outside for five minutes as he awaits to whack someone. Should I count that as a positive thing?

A complete BOMB perhaps? Nah, there’s much worse out there, but it’s still pretty flawed. Definitely not the ‘lost classic’ that some folks build it up to be.