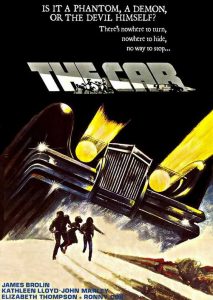 I’ve seen “The Car” several times over the years. I am a big fan of horror movies and while this is not exactly a “classic” by any means, I still enjoyed it. The plot is basically a car which drives around a desert town killing everyone/anyone it can. In these types of movies, you tend to enjoy watching and choosing who becomes the victims. I found the acting to be a little trying at times. In fact, at times, very bad. I mean, having two actors scream at each other (in one scene) does not create tension, it creates confusion. I like James Brolin in this film and John Marley as well, even though he didn’t have much to do.

The star of the movie is “The Car”. What I did not enjoy about the film was as a viewer I did not know anything about the car. Where did it come from? Why was it there? Was it the devil? A demon? I wanted to know more about this killing machine. I found that by the end of the film I was still a little confused. Also, I think this movie was a rip-off of the TV thriller released back in 1974, “Killdozer”. The tale about a killer bulldozer terrorizing a construction crew. Possibly one of the worst ever made TV movies. The Car was much, much better. I remember seeing “The Car” at the movies. I think it stayed for about a week. Needless to say, the movie was a bomb. However, that does not mean it was a bad movie. There aren’t very many horror movies that are a big success at the movie theatre. I think they tend to be more successful on video.

It’s a shame that this movie wasn’t more successful because I was looking forward to a sequel. Who knows, maybe they’ll release “The Car 2” or “Son of Car”. All that being said, take my advice, rent this movie. Pull up a chair, put the lights on low, snuggle beside your favorite person (wife, etc.), grab some munchies and, no matter what you do, make sure you keep that remote in your hand at all times.