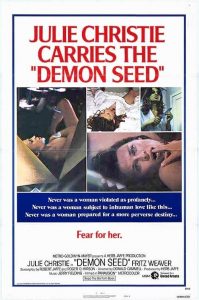 Demon Seed is an adaptation of the novel of the same name by Dean R. Koontz. I wasn’t sure what to expect when I first saw this film. Needless to say, I was impressed. Whilst the idea of a megalomaniacal computer is not new, it is used to great effect. Proteus IV is a computer that actually questions the tasks it has been made to do and what the relevance of those tasks are. It also seems to have emotion and is heard several times to other characters in the film that he does not wish to hurt them when they are not co-operating with his demands. Although aspects of this film are now dated ( particularly the computer equipment ),Proteus IV’s interesting philosophy, Julie Christie and Fritz Weaver’s performances and the unexpected creepy ending make this film worth watching.