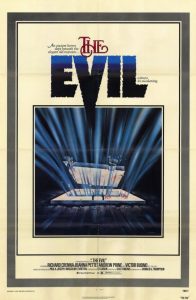 Richard Crenna and Joanna Pettet star as CJ and Caroline Arnold, a couple that has just bought the old Vargas Mansion, and have invited some friends and former patients from CJ’s psychiatric group (? I know, I thought it was sort of odd) to help clean the place up. Caroline begins to notice creepy things about the house, including a transparent apparition that disappears when she takes a second look. She even finds an old diary of Emilio Vargas, the deceased owner of the house, and eventually, she gets the feeling they are all being warned to leave the house. While looking for Mary’s (Cassie Yates) dog, who has run off and gotten itself frightened by something, CJ finds a cross in the basement, over a latched passageway in the floor. As he pries open the doors, they begin to lift and open themselves, and all hell breaks loose. (Literally.) The house shakes violently, one stock character being electrocuted along the way. Then all the windows seal and the doors all are jammed shut. After realizing they are trapped, the survivors struggle to find an explanation to what’s going on, and in their pursuit to survive the night, the evil begins claiming their lives one by one….

All slightly typical fare, with some inspiration by “The Haunting,” no doubt. The characters are all likable, though, and the movie can be entertaining at times. Yet ridiculuous explanations to legitimize what’s happening, some loose ends, and a predictable play-out all make the movie below-average. Like, what ever happened to Laurie (Marie Louise Weller), and why did A) Ray (Andrew Pine) give up so easily on helping her, and B) why didn’t he tell Felicia (Lynne Moody) in the next scene? That was my biggest problem with the movie, along with the scene where Caroline finds CJ, Laurie, and Ray possessed. She (supposedly) drove the evil out of them, but I was just sort of left unsatisfied by the fact that the scene didn’t seem to matter by the next scene. The rest I can deal with. As for the climax….Well, it was an okay idea. (“The Beyond” had the same idea, of the hotel being over one of the seven gates of Hell.) But unlike “The Beyond” this movie executed that idea in a pretty weak manner. The Devil just didn’t seem to threatening to me. Seemed a bit more like a child molester than the epitome of all evil.

Alright, you could do worse. And I could have done far worse when I rented this. I suppose if you can get past the plot holes, the terribly cheesy music (especially that way-too-happy music in the ultra-cheesy ending!), the excessive deaths-by-execution, and the somewhat weak climax, you may enjoy this.