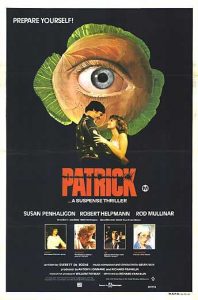 After killing his mother and her lover by electrocution. Patrick is now in a coma, where he has been bed-ridden for the past three years in a private hospital. The reason for him being kept on life support is that the doctor in charge; Dr. Roget is using him in the experiment into exploring the territory between life and death. Kathy a new nurse arrives and the first job she is given is to look after Patrick. While, the other staff might not see it, Kathy starts to realize that Patrick has psychokinetic powers, which he uses to manipulate things to his likings.

This is one film I’ve always been pushing aside, but I finally took the chance and seeing a couple of favourable reviews also helped. “Patrick” I found to be an interesting genre piece that was above-average compared to most low-budget and knock-off horror flicks. But again it didn’t entirely wow me altogether, but still the film really does string you along with it’s slow grinding suspense and slick execution. There are some effective scenes that are illustrated with great skill, but the suspense comes mostly from the thoroughly, taut script. Which, it does comes rather thick in. If you’re looking for any blood, you’ll be highly disappointed as this centres around the psychological nature than anything psychical. There are some minor acts of violence with the most damaging sight being done to a frog, but it focus more so on the aftermath and rallying the suspense through the surprising developments. The subtle plot has some unique details where little hints and suggestiveness are build up in key areas. The back-story surrounding Patrick is interestingly, involving and we’re given time with most of the characters. But it might be too slow for some tastes. I actually thought they could’ve tighten the film down from its two hour running time, because at times it did kind of linger. Director Richard Franklin also brings to the table influences from Hitchcock, but also he adds some masterstrokes to his self-assured and patient handling of the picture. The professional cinematography plays around with some sharp moving shots and on show is a multi-layered score that plunges you into the deep end. The unknown cast are more than adequate with a strong lead performance by Susan Penhaligon as Kathy and Robert Thompson’s appearance is creepy when they cut to him laying in bed as the vegetable Patrick. Robert Helpmann also is decent enough as Dr. Roget and rest of the supporting cast deliver fine performances.

Overall, “Patrick” follows a familiar pattern, but its done quite well.