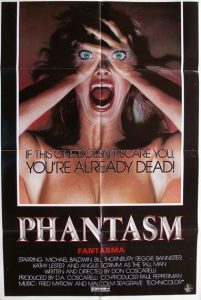 After the death of Tommy (Bill Cone), who was stabbed by a woman at the cemetery, Jody (Bill Thornbury) and his friend Reggie (Reggie Bannister) attend the funeral at the Morningside funeral home. Jody is followed by his teenage brother Mike (Michael Baldwin), who has just lost his parents and is afraid of losing his big brother that intends to travel.

Mike snoops around the cemetery and sees the mortician known as The Tall Man (Angus Scrimm) carrying Tommy’s coffin alone without any help. Mike breaks in the mortuary to investigate the mystery and discovers weird dwarf creatures with yellow blood and dangerous flying spheres that protect the location. When he is chased by The Tall Man, he cuts his finger and brings it home to show Jody to convince his big brother that there is a dark secret in the mortuary. Jody, Reggie and Mike discover that The Tall Man is from outer space and is transforming dead bodies in dwarfs to work as slave in his world. Now they decide that The Tall Man must be destroyed. Will they succeed in their intent?

“Phantasm” is one of the most weird and original cult movies that I have ever seen. The surrealistic and dreamlike story entwines horror with sci-fi with many twists and bizarre characters and situations.