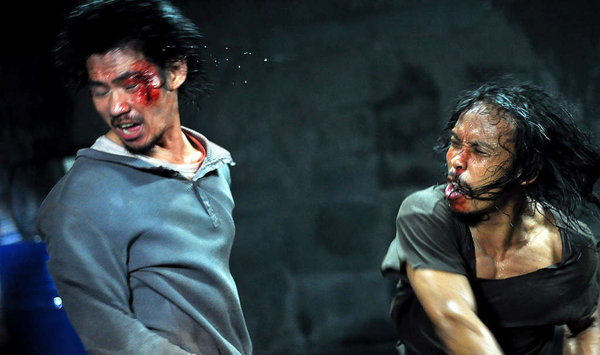 Die Hard goes condo in The Raid: Redemption a frenzied Indonesian action movie whose action credentials are through the roof.

Here’s the brutally simple premise: A team of heavily armored cops enters the ground floor of an apartment high-rise owned and occupied by a crime kingpin protected by several floors of armed thugs.

It’s an action movie in three acts – automatic weapons, blades, then fists. The higher the cops go, the more elemental the combat. In truth, though, most of the officers don’t go very high. Most are wiped out by bullets, and by the time drug-crazed, machete-wielding maniacs start roaming the halls, we’re essentially down to one courageous officer (Iko Uwais), his wounded comrade, and his commander.

I was not surprised to find that Raid, a huge buzz movie at Toronto and South by Southwest, contains plenty of visceral thrills – its hand-to-hand combat scenes celebrate the Indonesian fighting style pencak silat.

I was surprised to find that Raid contains a plot, and a pretty good one. The less said about it the better (be careful reading reviews), but think of it as a classic Warner Bros. cops-and-robbers programmer by way of John Woo.

The movie’s East/West feel may have something to do with its creative bloodlines. It’s subtitled with an Asian cast, directed by Welshman Gareth Evans, who went to film school in the U.K. The fighting styles are strictly Eastern, but the movie’s DNA has the feel of a Hollywood B-movie – Assault on Precinct 13 (the John Carpenter original) has been cited as an influence, and that seems about right. If true, it’s been a nice couple of years for Carpenter, whose influence has been felt in District B13 and that other recent masterpiece of apartment-building mayhem, Attack the Block.

The Raid: Redemption is a more brutal piece of work. No parkour, no jokes. It’s not a date movie. The fights are to the death, and death takes its sweet time. Since there isn’t much in the way of dialogue, the characters express themselves through physicality. The most expressive? Yayan Ruhian, the crime lord’s “mad dog” right-hand man and enforcer, whose crazed fearlessness becomes mesmerizing. He drops his gun to ensure a fair fight with an opponent. He then drops his gun to ensure a fair fight with two opponents. In our movie era of impersonal F/X robot fights and superhero smackdowns, this feels almost humane.

Director Evans (already at work on the U.S. remake) has a knack for sketching characters quickly, vividly. In the opening scenes, the story’s stoic hero (Uwais) rises early, kisses his pregnant wife goodbye, says a silent prayer – just a few, simple strokes, but our hearts are with him amid the bloody chaos that follows.

Does he make it?

I’ll never tell, but I’d say that title is a bit of a spoiler.