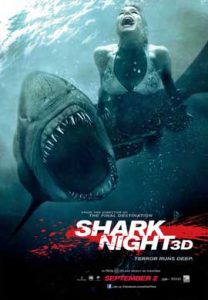 Sara (Sara Paxton) and her college friends travel to her lake house on the Louisiana Gulf for a wild weekend of beer pong, sunbathing, and death by shark. Be mindful of the PG-13 rating because, if you go into this expecting the finned version of Aja’s silicon laden Piranha 3D, you’ll be sorely disappointed. The most you’re going to get to feast your eyes on is a brief shot of Katharine McPhee’s and Alyssa Diaz’s side boobs.

It’s light on the carnage and heavy on the sentimental and often over-dramatic monologues. The gore is pretty watered down for the teen/tween audience. This is neither a good thing nor a bad thing – it’s a boring thing. While there are quite a few deaths, the attacks are short cut scenes that end with the camera lingering over pools of red coloring dye to signify, yep, they’re dead.

What’s missing from this humdinger is good ol’ fashioned fun. Most of its ilk celebrate the B-movie campiness with richly funny dialog, revel in the opportunity to mock its genre, or totally go off the deep end with exaggerated kills and/or gratuitous nudity. I realize Shark Night 3D wasn’t made to be an in-your-face exploitation film but it’s not Open Water either. It falls to the wayside because it has no guts, literally and figuratively.