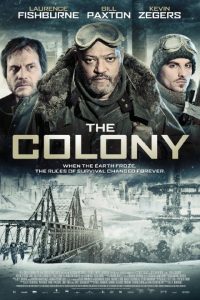 The filmmakers decided to combine a post-apocalyptic adventure with a zombie picture, and it was a pretty good idea. Here, Earth has entered a second ice age, killing most of the human race, but scattered outposts of survivors remain in underground locations. One such place is Colony 7, where about 50 people hunker down in an abandoned factory and try to survive off of some saved seeds used for farming in a greenhouse along with melted water. It’s not easy, with the common cold being fatal and infected people forced to either leave or be shot. There are several stories going on, the efforts to survive, the well-meaning but not entirely successful leadership of Briggs (Laurence Fishbourne) the love story between Sam (Kevin Zegers) a young resident loyal to Briggs and pretty botanist Kai (Charlotte Sullivan) who is in charge of the seed inventory, and militant army veteran Mason (Bill Paxon) who wants to install himself as the colony’s dictator. This comes to a head when a distress signal is picked up from Colony 5,a similar outpost a couple of days away. When Briggs, Sam, and another resident (Atticus Dean Mitchell) hike there to provide aid, disaster strikes. The film boasts convincing sets and snow, good photography, decent acting, and a some intelligent ideas. So why isn’t it all that exciting? For some reason, the writers never do anything new or novel with their material and everything dissolves into routine zombie mayhem, except that these zombies are just too clever to be believable. Not only are the various stories not resolved successfully, it’s becomes increasingly unbelievable. Clear footprints in the snow when it’s snowed non-stop for 48 hours is one of the more ridiculous events.