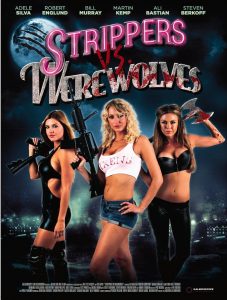 There have been some really zany over the top horror comedies come along over the last few years bust most focused on the zombie craze with films like Shaun of the Dead, Zombieland, and Zombie Strippers, but finally someone has decided to bring in the werewolves in Strippers vs. Werewolves. Is there any chance that this will work or fall along the lines of the so many other failed horror films?

Strippers vs. Werewolves follow a pack of werewolves seeking revenge for the death of one of their own at a strip club. This is a silly movie, but not in a bad way. Is it good of course not, but it is fun. The reason this one works well is that while they are delivering a dark comedy, they manage to take themselves seriously for most of the film. This aspect makes the movie work a bit better than its title would lead you to believe. It’s really not until the end confrontation in the film that things get a bit sillier. You get the feeling this was the silly nature it was headed towards which thanks to not going full on silly for most of the film makes it welcome, but could easily through some off. Most of the acting was pretty bad, but in this sort of movie you don’t expect too much. They delivered the blood and gore horror fans want, but not near as much nudity as you would have expect, especially for a movie involving a strip club.

This is a bit of a silly movie, but if you can just sit back and have some fun it becomes just that, fun. Filled with some genre centric actors including Sarah Douglas (Superman 2), Barbara Nedeljiakova (Hostel series), and Robert Englund (Nightmare on Elm Street series) but don’t be fooled, Englund is barely in the movie and serves little purpose other than his name recognition.