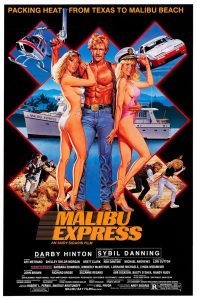 I believe that in order to enjoy an Andy Sidaris movie, you must be a REALLY undemanding viewer, accepting that story-telling takes a back seat to showing as much bare female flesh as possible along with a fair amount of violence(..carried out in a more tongue-in-cheek way). While the plot in Malibu Express does become rather needlessly convoluted, Sidaris doesn’t allow it to get in the way of delivering plenty of fake tits and athletic bodies. Darby Hinton, the star of the film(..modeled after the looks of a Jameson Parker or Chuck Norris)is all smiles, as well as he should be considering the amount of ladies who offer their bodies to him, as a private eye put on the case of uncovering the identity of the person behind selling computer chip secrets to the Russians. Soon he is involved in uncovering the person involved in the murder of a butler / driver who was blackmailing the household of a rich wheel-chair bound aristocrat, Lady Lillian Chamberlain(Niki Dantine).

It all ties to a businessman whose being supplied monetary funds from Lady Lillian’s daughter, Liza(Lorraine Michaels). He sends his muscle after Cody(Hinton), needing to recover some film shot by Shane(Brett Clark), the butler before he died after the killer shot and stabbed him. The film has the face of the killer who was escaping after removing a tape from Shane’s video recorder. Sybil Danning has a minor role as Contessa Luciana, an agent who not only hires Cody but is one of his (many)lovers as well. Well, Danning is here basically to show a little skin, mostly in a teeny bikini or gowns which are designed to showcase her figure and big jugs. Practically the entire female cast hired by Sidaris are nude models and Playboy bunnies, and Cody gets plenty of action(..as does Clark who not only beds Lady Lillian’s daughter, Liza, but her daughter-in-law, Anita, played by Shelley Taylor Morgan, as well)in the process.

Thrown in the mix is this family of hicks who constantly challenge Cody to street races and a female cop, Beverly(Lori Sutton), who assists him in his case..among other things. Unveiled as Cody works on the case is that Lillian’s son, Stuart(Michael A Andrews), married to Anita, is gay(..and moonlights as a transvestite,), one of three Shane was attempting to extort. Cody’s affair with a race car driver, June Khnockers(..yuck, yuck), is played for laughs when he uses her vehicle to evade the trio of assassins after the role of film..Lynda Wiesmeier is always pulling out her tits, often getting the attention she seeks after. Another gag is two honeys who have a boat docked on the same harbor as Cody, always calling on him for a little hanky panky, with him often too busy to take them up on their offers. It’s important to understand what you are getting yourself into when popping in an Andy Sidaris movie because his work doesn’t exactly appeal to the head on your shoulders..if you catch my drift.