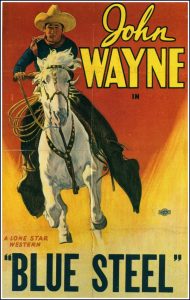 What’s the best way for a bandit to maintain a low profile? How about making noise while robbing a safe, leaving behind an identifying spur, and wearing a polka dot neckerchief. Yakima Canutt is Danti, the Polka Dot Bandit in this 1934 Lone Star Western, but the gimmick is not fully carried out in the film. The central plot involves an unscrupulous town boss Malgrove (Edward Piel Sr.) who schemes to buy out all the local ranchers because of gold discovered in the topsoil (?).

For fans of B Westerns, there’s a lot to study in “Blue Steel”; for starters, it’s interesting to see Wayne’s character shoot directly into a crowd to knock a gun out of the hand of bad guy Canutt. This technique is used as late as the 1950’s in a number of the Lone Ranger TV shows.

In another scene, two baddies attempt to get the drop on Wayne’s character. As he escapes into a lofty barn, he uses a lasso to scoop up one of his antagonists, but the roped victim never cries out to his partner for help. Similarly, as he engages the other in a fist fight, both remain silent throughout the encounter.

Director Robert North Bradbury makes use of an interesting film technique where he fast forwards the motion during an action scene, usually involving riders on horseback in a non threatening sequence. It’s effectively done and is also used by director Harry Fraser in some of his Wayne Lone Star films such as “Randy Rides Alone”.

Pay close attention during a chase scene as the bad guy posse pursues Miss Betty on horseback; when hit by a shot she falls to the ground seemingly unconscious, and as she lands she ever so slightly uses her leg to shift position. Within seconds she’s scooped up by the vigilant Marshal aboard Gabby’s buckboard, and then she miraculously climbs aboard her own horse to once again gallop away – what a gal!

By the time it’s ready to wrap things up, Marshal Carruthers and Sheriff Jake lie in wait, six guns trained on sticks of dynamite planted in the side of a rock face. As the bad guys make their way into the pass, their fate is sealed under tons of tumbling mountainside.

As in so many of John Wayne’s Westerns of this era, his character gets the girl without even trying. The scene fades with the marshal and his future bride riding off into the sunset, until it’s time to do it all over again in at least another dozen or so Lone Star films.