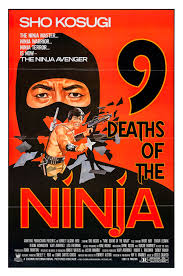 As one who pretends to have benefitted from a post-graduate education, I am almost ashamed of my love for this, the best/worst of the Ninja flicks. And while Ninja films are no longer in vogue among the “militia in training ” college drinking crowd, this one is worth a look by anyone who loves MST3K or bad movies in general. The stupidity of this film is so self-contained that it needs no clever running commentary, but feel free to drink a few beers and add you own MST3K witticisms anyway.

Check out this plot: a band of terrorists hijacks a busload of tourists and makes several unclear demands. The terrorists are led by Alby the Cruel (Blackie Dammett, father of Red Hot Chili Pepper Anthony Kiedis), who sits in a wheelchair wearing elegant lady’s gloves, accompanied by his pet monkey. Alby speaks in a poor German accent, with such great lines as “Az you gan zee, the hoztagez are un-har-med!” Alby’s crew includes sexy Col. Honey Hump (a militant lesbian), Dr. Wolf (a sexual deviant) and Rahji the Butcher (Alby’s gay lover). Of this bunch, Rahji is the most hilarious, wandering around with this forced malevolent chuckle all the time.

The good guys that come to save the day include Sho Kosugi, whose normal gravelly, yogurt-filled voice is cleverly dubbed by someone who sounds like a pop radio deejay, and Bent Huff, who spends most of his time grinning Puckishly whenever Sho Kosugi gets into a fight (trust me, I’m not making this up). Emilia Lesniak rounds out the trio, a sexy blonde of such immeasurable talent that she never worked in cinema again. Their commander , Vijay Rankin, is played by Vijay Amritraj, that dorky Indian tennis pro who starred in the lame James Bond flick “Octopussy” opposite Roger Moore. Amritraj has many pathetic lines, but the best one comes when he gets a phone call and exclaims, “What? Hijacked?”

Is there a reason to see this film? Well, this one has the potential to be one of the all-time great beer-drinking movies, even though it has nothing to do with fraternities, sex or keggers that last until the wee hours of dawn. I quit drinking when I graduated from college, but I still pop “Nine Deaths” in the VCR now and then because in brings back the giddy sensation of intoxication without the hangover. This one is as bad as it gets, and yet, like a car crash or an episode of “Saved By the Bell,” you watch it in spite of yourself.