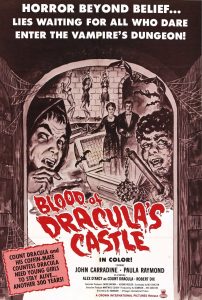 This movie opens with a woman (Vicki Volante, a Joan Baez lookalike) driving along listening to her car radio. The song, “The Next Train Out” is so catchy I went around singing it for days after I had first seen this movie. Amazingly John Carradine does not play Count Dracula, even though he had recently done the role in “One Shot” Beaudine’s BILLY THE KID VS. Dracula in 1966; he is George the family butler. Dracula is played by Egyptian actor Alex D’Arcy whom you can also see in HORRORS OF SPIDER ISLAND and FANNY HILL. Countess Dracula is Paula Raymond who costarred in BEAST FROM 20,000 FATHOMS and the newly rediscovered HAND OF DEATH. It seems everyone has relationship problems eventually and after 400+ years Dracula has been reduced to the henpecked husband of a domineering wife! (Hmmmm, maybe that is why John did not want to play The Count this time.)

Hiding behind the names Count and Countess Townsend the vampires live in a castle in the Arizona desert. Victims (all of them female of course) are brought to them by their cretinous henchman Mango (just where do movie villains go to finds all these hunchbacked lumbering brutes that scary movies seem to abound in?) and drained of their blood by George. They drink blood from martini glasses and wonder if they will ever be accepted in polite society. The Draculas have also got religion in this film. Thanks to George they are devoted worshipers of the Great God Luna and occasionally burn a victim alive at the stake as a sacrifice to him(her? it?).

When the new owner of the castle (Gene O’Shane) turns up with his fiancée (Barbara Bishop) the Unholy Three (I’m not counting Mango among the conspirators) try to get him to sell the castle. When he refuses all Heck breaks loose . . . well, as much as director Al Adamson’s budget will allow!

Watch for Robert Dix, son of silent film leading man Richard Dix, playing family friend Johnny. He is usually a likable guy but when the moon turns full he becomes a psycho killer. TV prints splice in a quick shot of some guy wearing a Don Post werewolf mask in an attempt to make the plot more interesting but theatrical prints do not have this embelishment. Robert also appears in FORBIDDEN PLANET and FRANKENSTEIN’S DAUGHTER.

63 year old John Carradine looks younger than his years with his hair dyed black once again. He even does his own stunts for his death scene. Speaking of death scenes, Mango (Ray Young) goes through enough to kill 10 men; shot, hit with an axe and set on fire he just keeps coming back! Whew!

Is this film a classic? Gosh no! But it IS a lot of fun! Just seeing Long John stomping around a dusty old castle like it was still the 1940’s at Universal makes it worthwhile. Besides, you just might find yourself singing along with “The Next Train Out” after more than one viewing.