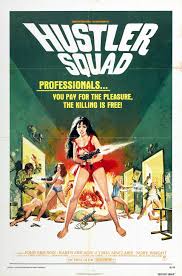 This movie is basically The Dirty Dozen (1967) but with a gang of bad girls instead of a platoon of bad boys. All-in-all, not a bad idea for a movie in my book. Set during World War II, we have four civilian women who are trained to become assassins for a highly secret mission where they will use their sexuality to get up near and close with four high ranking Japanese officers who are scheduled to stop off at a well-guarded island retreat where they intend to spend some relaxation time with some ladies of the night. Needless to say, if the plan goes ahead as expected, these guys are going to be in for a decidedly different type of excitement than they had in mind.

Hustler Squad is one of many exploitation movies that were made in the Philippines during the 70’s. It mixes action with a bit of sexploitation. It features a character called Major Stoney Stonewall – a man who, needless to say, doesn’t play by the rules. His style of unorthodox thinking leads to the killer prostitutes idea. The girls are assembled from a convict, a rape victim, a hooker and a woman with a terminal disease. Production values are pretty basic as you would probably expect from a Filipino action flick and it rarely gives off the feeling that the action is really happening during the 1940’s. The women especially look thoroughly like 70’s chicks. But I’m not really complaining because I find this one to be a somewhat unfairly maligned movie which succeeds in entertaining from start to finish. The basic plot-line is a decent one and the action is generally quite a bit of fun. And there’s always something undoubtedly good about seeing a bunch of women get together to kick butt in an action flick. This one is certainly rough around the edges in places but that’s also part of its charm.