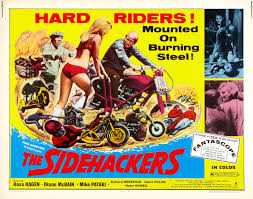 “Vince Rommel” (Ross Hagen) is a motorcycle mechanic who enjoys racing and is soon to be married to his fiancé “Rita” (Diane McBain). Then one morning a man named “J.C.” (Michael Pataki) comes to his shop and asks if he can repair his motorcycle within a certain time-frame. After Rommel’s business partner, “Luke” (Dick Merrifield) examines it he replies that they can fix it within a week or so which leaves J.C. quite impressed. At the same time J.C.’s girlfriend “Paisley” (Claire Polan) becomes attracted to Rommel and quickly becomes more and more infatuated with him as time passes. Rommel, on the other hand, is deeply committed to Rita and this creates a huge problem when Paisley comes on to him and is rejected. Now rather than reveal any more I will just say that I am somewhat puzzled as to the extremely low rating this picture has received on IMDb. While it certainly isn’t a great movie by any means I have personally seen many other films in this particular sub-genre which were much worse. That aside, although I didn’t especially care for the rather extended opening scene, I thought that the plot was interesting enough and all of the previously mentioned actors performed in an adequate manner. Likewise, while I also didn’t quite care for the ending, at least it had some surprise value which I believe should also merit some recognition. In any case, although this movie definitely isn’t Academy Award winning material,