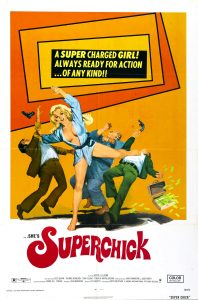 The name “cult movie” is often given to films which continue to be screened, or to sell in home movie format, more than a generation after they were first released. Superchick, which was first released in 1973, now comes into this category. Its cult status is largely due to ongoing interest in it by those women who regard it as an early and effective feminist film.

Despite the “Superwoman” connotation, “Superchick” is not a cartoon character but a very competent young lady working as an air stewardess – a career option which in the 1970’s was commonly regarded as one of the most glamorous open to any girl, and which also enables her to emulate the traditional matelot who reputedly has a wife in every port. Since she holds black belt status in karate, she is in a position to make it quite clear that she is very happy with her bachelor existence, and is in no way beholden to any of her extensive suite of male admirers. This film is a situation comedy which avoids the generally much shorter lived appeal of outright farce. Its appeal to feminists is also heightened by a climax in which our heroine uses her karate abilities to avert a hijacking and save all the other passengers on her plane from a potentially unpleasant fate. To ensure that this film will appeal to men as well as to their partners, the Director has wisely ensured that is liberally sprinkled with eye candy.

Superchick can be enjoyed by those who are not too critical and want a very light easy to watch comedy which they will forget soon after viewing. It is so forgettable that they will probably find it equally enjoyable if watched again in a year’s time; despite its age it may therefore retain its status as a cult movie for some time to come.