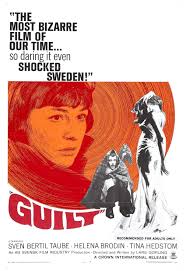 About a young couple who accidentally by car run over someone and kill him. The victim turns out to be an escapee from an asylum for the mentally ill.”GUILT” is the finger-pointing title of the virtually two-character Swedish film that was curiously allowed admittance into the 34th Street East yesterday, but it is also what the film’s distributors and exhibitors should feel for putting such a murky, meaningless picture before trusting audiences.

Except for one scene of sexual contact between the two apathetic principals, which is of no more candor or refinement and certainly of less skillfulness than many other similar scenes we’ve lately seen, there is absolutely nothing in this picture that I would think its merchandisers could assume would be appealing to people in this country—or anywhere else, indeed. And, of course, that scene of sexual contact is nonessential to the disagreeable theme.

The tale is simply one of alienation between two persons who are nominally in love, and of their endless bickering and brawling as they drive through the wintry country in an automobile. Along about halfway through the picture, it is gloomily revealed that the immediate cause of the man’s vexation is that he has run down a pedestrian along the road and he is trying in some way to blame this on the woman, as well as other vexatious things.

Sven Bertil Taube is unpleasant — surly, arrogant and pompous—as the man, and Helena Brodin is pathetically apologetic and compliant as the girl. Her dismal distress and resignation to utter despair in one scene is the one clearly expressive and affecting manifestation in the film. For the rest, it is vague and rambling, made up of cross-cut suggestions of the man’s enthusiasm for racing automobiles.