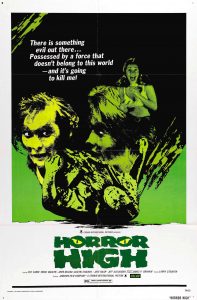 HORROR HIGH is not a good movie but what it lacks in an engaging plot, three- dimensional characters, and technical skill it makes up for in low-budget charm and bloody messes. It’s the formulaic paint-by-numbers story of a weakling being pushed around until he finally pushes back. The weakling in this case is high school nerd Vernon Potts (Pat Cardi). Vernon has two passions: science and guinea pigs. In fact, he’s dedicated most of the past year putting together an in-depth biology report on his pet, Mr. Mumps. Vernon is, obviously, a laughingstock and everyone in his school hates him. His English teacher has no problem sabotaging his biology report to teach him a lesson. His coach is openly disgusted with our science nerd’s lack of athleticism. And the school janitor holds a violent grudge against him for scaring his cat out of the science lab. The one person who doesn’t hate Vernon is Robin (Rosie Holotik), seemingly the only rational human being in the entire school. There might even be some chemistry between the two of them but it’s snuffed out by Robin’s boyfriend, the popular jock Roger (Mike McHenry). When a late night study session leads to a conflict with the janitor in the science lab, Vernon is forced to drink the product of his guinea pig experiments: some sort of serum or chemical. The movie doesn’t care to explain. What we do know is the formula turns Vernon in a killer beast and his tormentors better hide now.

Subtlety is not a concern in HORROR HIGH. Everything that happens is telegraphed long before it happens and you see every plot point coming from a mile away. The first act spends all its time just lining up the victims like dominoes. The English teacher cuts up Vernon’s biology report with her beloved paper cutter because he mistakenly turned it in instead of his book report (guaranteeing an F in both classes and ruining his grades out of spite). The janitor has a spazz attack when Vernon chases off his cat because it had been hanging around Mr. Mumps cage waiting for a snack. The coach just utilizes generic anti-nerd hatred, and Roger terrorizes Vernon in the locker room, going so far as to tear up his guinea pig notes. There we go, all our little victims lined up in a row. Then we move to the second act when the janitor literally forces Vernon, a teenager and student, to drink an unknown chemical concoction as punishment or, more accurately, bullying. Then the rest of the movie is a series of fun murders perpetrated by what I believe to be a were-guinea pig. In case you weren’t sure what direction the movie was headed from the start, it opens with Vernon in English class watching a “Jekyll & Hyde” film. I’m not kidding; this is so tactless it feels like a student film. “It’s so deep you, guys. There’s, like, these themes running throughout it.” And there’s a were-guinea pig.

It’s stupid but it’s charming. All of your characters are stock stereotypes without an ounce of characterization because the fun is in watching all the mean people getting their comeuppance. What little effort went into this movie seems to have gone to the horror effects. Good. If you’re going to skimp on everything else, leave the money where it counts. The science lab leaves a big drum of pure sulfuric acid right there in the middle of the classroom, unsealed and everything. And you know what? It gets put to good use. The English teacher loves her paper cutter? Cool, because you know that’ll pay off. I wish some more effort had been put into the makeup effects. The were-guinea pig is wisely kept to the shadows for most of the movie but it kills the illusion a little when you find out it’s nothing more than a shaggy wig and some brown face paint. Again, the cheapness is semi-charming and I really think this movie would’ve developed a bigger cult following with a few changes. First, tighten it up. There is way too many lingering shots of nothing in this movie. Trim it down and keep the pace moving. Second, find a way to end the movie after the coach’s murder. Everything after that is pointless and anticlimactic. I was actually enjoying the simple stupidity of HORROR HIGH for that first hour but that last 30 minutes lost me. A fan edit might be in order because some remastering and pacing touch-ups could do this movie a world of good and score this little movie that couldn’t some attention.