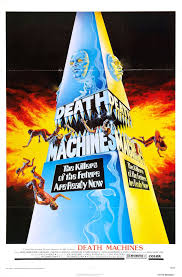 Fans of trashy, bad 1970s cinema gather ’round. I’ve found a real winner – Death Machines. Calling Death Machines “so bad it’s good” doesn’t begin to explain how deliriously enjoyable this movie truly is. Sure, it’s bad – in fact you’d have a hard time finding anything quite so inept – but it’s also an incredibly fun experience. What little plot the movie has concerns three assassins for hire – one white, one black, and one Asian (Think of the Death Machines as the Rainbow Coalition of killers – how politically correct!). These killers are all but indestructible – they’re even impervious to bullets (the movie may have explained why or how, but I must have missed it). On a mission to take out a local karate studio, they inadvertently leave one man alive. They may have taken off one of his hands, but he’s alive nonetheless. The police can’t seem to find any leads into the karate studio killings, so it’s up to our hero, Whining One Hand (as I like to call him), to bring down the gang of killers.

Oh where to start? This is one of those instances where I could easily write paragraph after paragraph about the ineptitude on display in Death Machines. But I’m not sure I can do the thing the justice it deserves. So instead, I’ll summarize some of the highlights:

– The plot is little more than one set-piece after the next that only fit together because some of the characters are the same. The attack on the karate studio, the killing of the man in the phone booth, the bazooka shot at the airplane, the obligatory fight scene in the police station, and the bombing of the bank president – the only connection is that a familiar character or two appears in each scene. Otherwise, you might get the wrong idea and start to think the Death Machines actually had no real, coherent plot (wink, wink).

– The killers receive their marching orders from one of screendoms most bizarre master criminals. Madame Lee (and I only know her name by reading the credits on IMDb) is one weird cookie. To begin with, she seems incapable of opening her mouth and speaking as a normal person might. Between that, her thick accent, and the boom operator’s inability to get close to her, it makes it just about impossible to understand what she’s saying. And then there’s that wig! Why in God’s name did anyone think it would be a good look to have her wear a 12-inch high geisha wig? She looks ridiculous. Add to that her strange way of walking, her unusual choice of wardrobe, and her totally out of place facial expressions and Madame Lee is a sight that must be seen to be believed.

– The fight choreography is laughable. The opening fight scenes where Madame Lee is picking her three killers is beyond ridiculous. My 6 year-old son takes karate and I’m sure he and a few of his friends could have put together more believable fight set-pieces. And what’s with the gun? Who told the white guy to bring a gun to a karate fight? And was it just me or were the opening fights rigged to ensure the racial diversity of Death Machines? White guy fighting white guy, black guy fighting black guy, Asian guy fighting Asian guy? It’s too funny.

– Has there ever been a more ineffective hero than Whining One Hand? When not whining about his problems, getting beat-up by an old man in the bar he works at, or making love to the most unappealing nurse imaginable (I think I might have just thrown up a little in my mouth thinking about it), one of his lone contributions to the movie is to follow the bad guys, crawl through the tall grass, and watch as they blow up a plane and the unknown passengers therein. Does he do anything at all to try to stop the baddies? NO. He merely watches. By the time he shows up at the run-down house (that’s obviously a stand-in for an opulent mansion- just use your imagination) the Death Machines have left, Madame Lee’s right hand man is already dead, and yet he still manages to get attacked by the wobbly sword welding Madame Lee and her gigantic wig. What does our hero do? Again – nothing. Thank God the police were on hand to take out the dragon lady or Whining One Hand might have ended up being Whining No Hand.

On and on it goes (I haven’t even gotten into the technical issues, the lack of any sort of ending, the inappropriate Casio keyboard music, or the old time gospel music played over the fight scene in the grocery store/bar). Death Machines is a real hoot of a movie that I implore all fans of bad 70s trash movies to seek out. You won’t be disappointed. As for my rating, I’ll be honest, rating movies like Death Machines is difficult. On one hand, it’s a stinker of epic proportions. But, on the other hand, I’ve always said that I rate movies based on my enjoyment. And with that in mind, I have to give Death Machines at least a 7/10 even with its numerous and all too obvious problems. Be warned, if the notion of a bad, plot-less 70s movie with characters that have no motivation or acting ability and big bad wigs with speech impediments doesn’t appeal to you, stay away. Otherwise, enjoy!